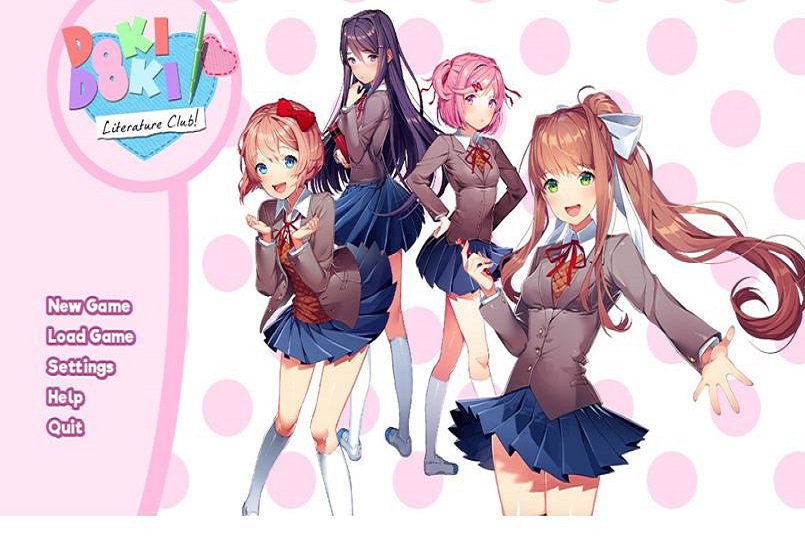 “This game is not suitable for children or those who are easily disturbed,” says the warning screen that appears when you start up Doki Doki Literature Club!.

On the surface, the game seems to be just another cute, casual dating simulator, but there’s something sinister lurking behind that facade, and the only clues to the game’s true nature are the warning screen and the “psychological horror” tag on its Steam page.

Please note that this article contains spoilers. If you want to experience the horror of Doki Doki Literature Club!, it’s highly recommended that you go into it blind. The game only takes about two hours to complete, and it’s free on Steam and on the game’s website.

The Game in a Gist

Doki Doki Literature Club! is a visual novel. The main character, a boy whom you control, is pushed by his best friend to join their school’s new literature club, which only has four members—all of whom are attractive girls (including your best friend). Like with most prepubescent boys, your character hopes to form a romantic relationship with any of the girls.

Most of the game progresses by reading through the story with little interaction aside from clicking text boxes. After every in-game day, you are tasked to “write” a poem by picking twenty words out of a preset list. The next day, you share that poem with each of your club members, and depending on your chosen words, your poem will attract one of them, allowing your character to bond with that girl. In turn, each girl will also show you her poem. Those poems can reveal a bit of their personality and backstory.

Doki Doki Literature Club! establishes those mechanics on the first day. Then when the second act starts, the game deconstructs the rules, undraping its underlying dread.

Around an hour into the game, when you’ve settled in and feel comfortable, you’re hit with a curveball. One happy-go-lucky character succumbs to depression and commits suicide, and you’re the first to discover her lifeless body dangling by a rope in her room. Then the game glitches out—and ends. That’s not the curveball.

The bigger surprise comes when you’re taken back to the main menu and the image of the dead character appears deformed—glitched out—as if her death affected the software itself. All your saved files have been deleted, forcing you to start a New Game, whose button also appears as a gibberish text, in contrast to the rest of the options. That’s just the start of the second hour, and it’ll only get worse from there.

The art style will sometimes appear warped, like hyperrealistic mouths and eyes replacing the girls’ anime ones, and disturbing dialogue (or just gibberish) may get inserted in the story. Most of these happen as the game’s cheerful soundtrack plays on in the background.

Even the gameplay isn’t safe from glitching, which may leave gamers wondering if they need a new gaming computer.

There’s More Than Meets the Eye

Doki Doki Literature Club! revolves around breaking the fourth wall. The very first poem of one character hints that they are self-aware, that they know they’re in a game and are trying to get out. Later, she confesses that she manipulated the game’s code, causing all the glitches and story changes, so that she can be with you—not the main character, but you, the player.

Her tampering causes files to appear in your computer, and the only way to finish the game is to delete her character file, a “.chr” file in the game’s installation folder.

Apart from that, meddling with the other files is not required to finish the game. Some of those contains many secrets that were left undiscovered until reddit sleuths Mithost and warchamp7 made an in-depth thread about the file’s contents.

Those Easter eggs seemingly give hints on what Team Salvato’s (the developer) next game will be. However, Dan Salvato has stated that their next project isn’t related to Doki Doki Literature Club!

Is This the End?

Short freeware games are usually low-key with almost zero advertising. Most of the time, they pass unnoticed and forgotten. Doki Doki Literature Club! got over two million downloads four months after its release in September 22, 2017—a surprising feat made possible through its cult following.

In IGN’s Best of 2017, the game even won the People’s Choice Award in several categories: Best PC Game, Best Adventure Game (for which it was also a runner-up), Best Story, and Most Innovative. Given how popular Doki Doki became, people are already getting hyped on Team Salvato’s next game.

Yet despite the spoilers, this article shows only a glimpse of what Doki Doki Literature Club! delivers. It’s a game that deserves to be experienced. So face your fears and play it. It’s only a game. some time that you are thinking to buy rs gold, Here are some tips can help you in safe online shopping: